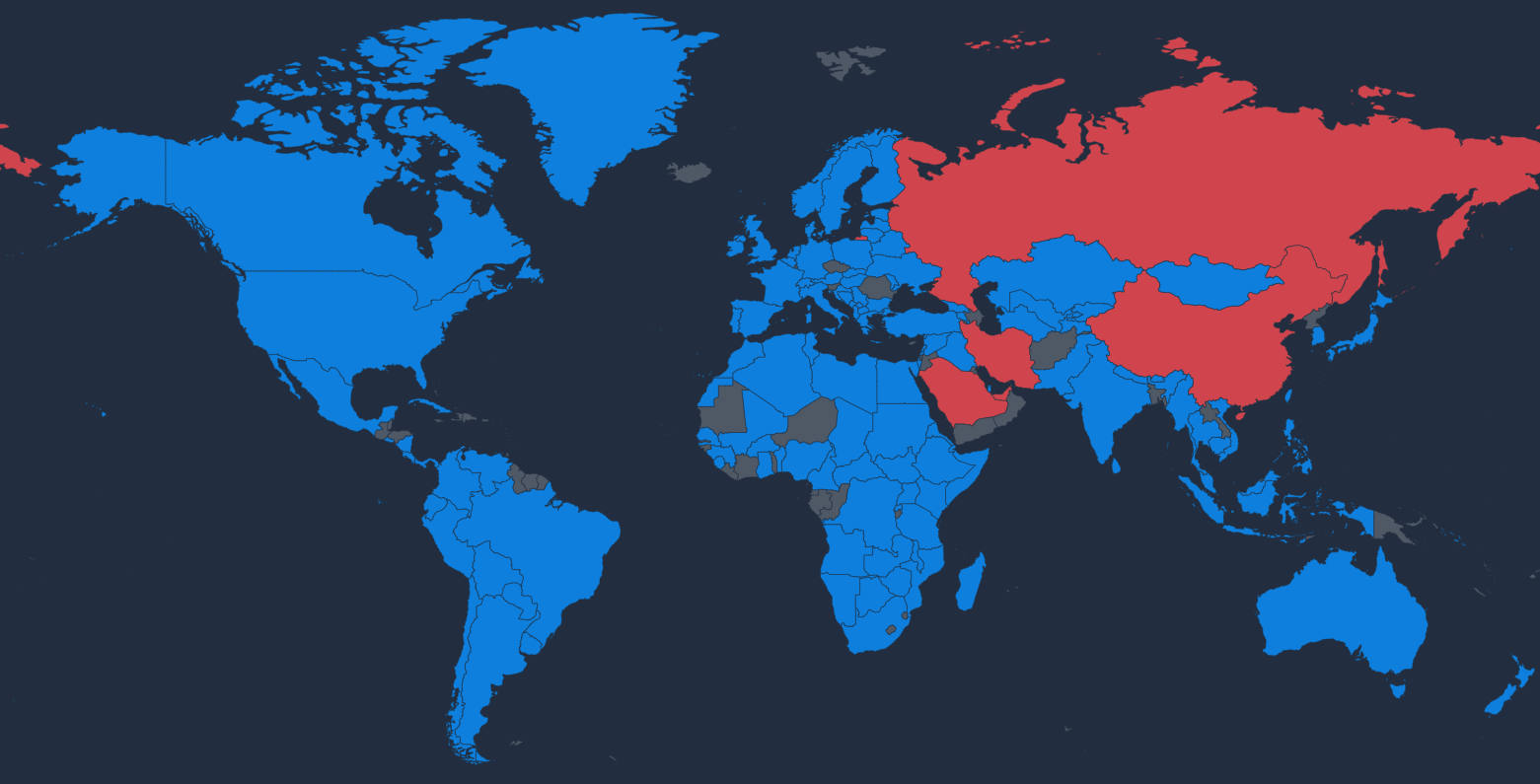 Where is Peng Shuai? In recent weeks, international attention focused on the whereabouts of the globally recognized Chinese tennis star who disappeared from public view after accusing China’s former vice premier Zhang Gaoli of sexual assault. Two prominent international sporting associations, the Women’s Tennis Association (WTA) and the International Olympic Committee (IOC), expressed concerns about Peng’s wellbeing. Yet after she briefly reappeared in public, their leadership subsequently responded very differently about the future of hosting their international sporting events in China (the WTA suspended 2022 tournaments in China; Beijing will host the Winter Olympics in February 2022), generating mixed messages for audiences unlikely to follow the story once it disappears from headlines.

When viewed in isolation, this incident might come across as an aggressive, albeit ham-handed effort by China’s authorities to mitigate criticism that might tarnish the country’s soft power appeal. But when seen alongside other incidents—such as when China-based internet giant Tencent dropped coverage of the Boston Celtics basketball games after one of its players criticized Chairman Xi Jinping, or when London-based Arsenal footballer Mesut Özil denounced Beijing’s repression of Uyghurs and saw his avatar erased from a video game and his name removed from internet search engine results inside China—a clearer pattern emerges. In all three of these cases, China’s authorities were keen to influence international narratives, exert control over messaging channels, and censor any mention of allegations against the Chinese Communist Party (CCP), applying a mix of implicit punishments and incentives on key stakeholders and information gatekeepers.

Such instances—which Christopher Walker and I have argued are better characterized as sharp power—point to the cultivated capacity of authoritarian actors to leverage resources in the commercial, media, knowledge generation, technology, and culture and entertainment sectors for political influence. As the Forum recently explored in a series of nine reports on Sharp Power and Democratic Resilience, global interdependence between autocracies and democracies across these public sectors has made open societies vulnerable to manipulation in unanticipated ways. The impact can be difficult to measure; it often manifests in the absences it creates, such as the suppression of pluralism, the censorship of free expression, and the corroded integrity of democratic institutions. Seeing this bigger picture, however, requires careful research and analysis to identify, contextualize, and connect the trail of dots left behind.

Global interdependence between autocracies and democracies across these public sectors has made open societies vulnerable to manipulation in unanticipated ways.

The Sharp Power Research Portal, a new interactive tool created by National Endowment for Democracy’s International Forum for Democratic Studies, will provide researchers, journalists, activists, and policymakers access to a broad collection of resources that illustrate the immense scope and scale of authoritarian sharp power influence. The Forum hopes it will serve as a resource ahead of the Summit for Democracy in December 2021—and for the upcoming “year of action” leading up to the second Summit in 2022.

The Portal catalogues research, reporting, and analysis on authoritarian influence across five public sphere sectors: commerce, culture and entertainment, knowledge generation, media and information, and technology. At its launch, the Portal documented more than 750 resources that shed light on how authoritarian sharp power has affected more than 130 countries in every region of the world.

The Portal features a map that allows observers to view the relationships between authoritarian influencers and affected countries. Resources are categorized according to the public sphere sector impacted, with keyword tags and open search functionality that make it easier to draw connections between incidents in different countries, regions, and sectors where experts and observers with a particular specialization may not be as accustomed to monitoring events. Exploring the map allows users to uncover patterns and geographic comparisons that might help decipher other cases of sharp power in action in a nearby country or faraway sub-region. 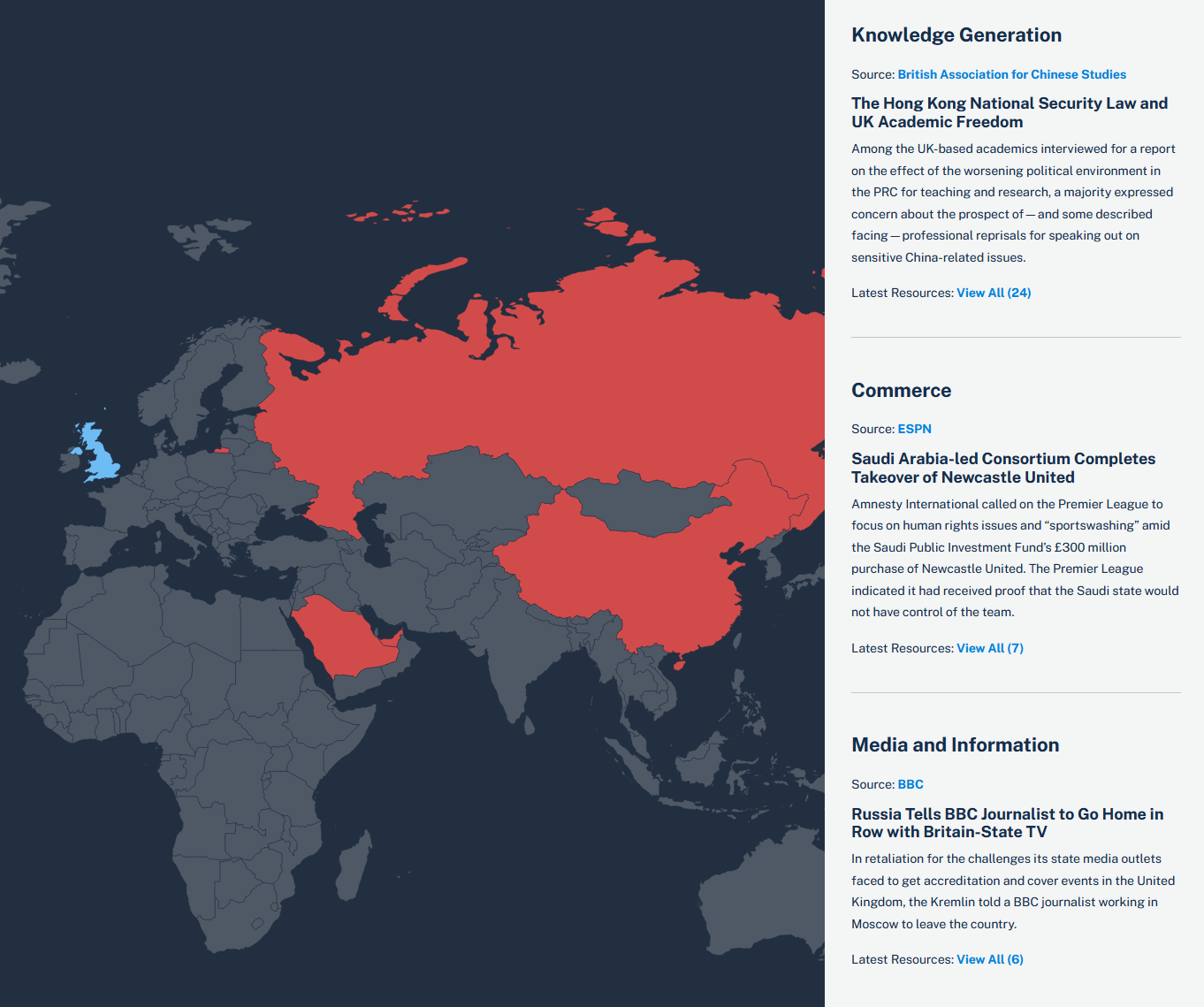 Two-thirds of the initial resources pertained to cases of sharp power in the media and information space and the knowledge generation sector (universities, think tanks, publishing, and policy), underscoring the value that authoritarian regimes place upon controlling narratives and framing public discourse. Examples range from reports of partnerships between authoritarian state media and a national wire service in an advanced democracy that resulted in one-sided news coverage dominating an entire language market to an analysis of apparent pressure on executives leading a high-profile international financing institution to alter methodology used in influential public reports, as well as cases of academic censorship where public events were canceled and an outspoken PhD student lost support from their own advisors and university.

This dataset is expected to grow over time as the Forum identifies more resources, users submit new resources for consideration, and relevant material is incorporated from other existing datasets that share a degree of overlap with sharp power’s scope. At the Portal’s launch, a majority of resources were linked to the People’s Republic of China, reflecting the investment by the CCP in international influence efforts. Russia, Saudi Arabia, Iran, and the United Arab Emirates also demonstrated significant capacity to exert sharp power across at least three of the five sectors measured in the Portal. While these actors were by no means the only authoritarian influencers developing and deploying sharp power, they were among the most well-resourced and assertive globally.

Building a dataset on sharp power is not without challenges. The data in the Portal relies on open-source materials and represents a starting point—rather than a comprehensive mapping—of sharp power globally. Ultimately, many cases may go undocumented because of intimidation, censorship pressures, and resource constraints that leave local actors unable or unwilling to investigate and report on suspected sharp power activities. At other times, the absence of data can be attributed to authoritarians themselves, who are motivated to hide or obscure the nature of relationships with the proxy actors they are able to leverage.

Given the scope and accelerating pace of the challenge documented in the Portal and elsewhere, it is more urgent than ever for democracies to recognize—and even anticipate—patterns of authoritarian influence and its impact on their own societies.

Given the scope and accelerating pace of the challenge documented in the Portal and elsewhere, it is more urgent than ever for democracies to recognize—and even anticipate—patterns of authoritarian influence and its impact on their own societies. Having an independent civil society is a crucial advantage that democracies bring to the challenge of building their own resiliency without sacrificing openness or the integrity of public institutions. The Forum hopes the Portal will serve as a tool to facilitate opportunities for cross-regional, cross-sectoral, and interdisciplinary collaboration while illustrating a more detailed mapping of sharp power challenges.

Jessica Ludwig is a senior program officer at the National Endowment for Democracy’s International Forum for Democratic Studies, where her research focuses on authoritarian sharp power influence in young and emerging democracies. Follow her on Twitter @JesLudwig. Assistant Program Officer Rachelle Faust, other Forum team members, and select outside organizations provided valuable assistance and leadership in developing the Portal.