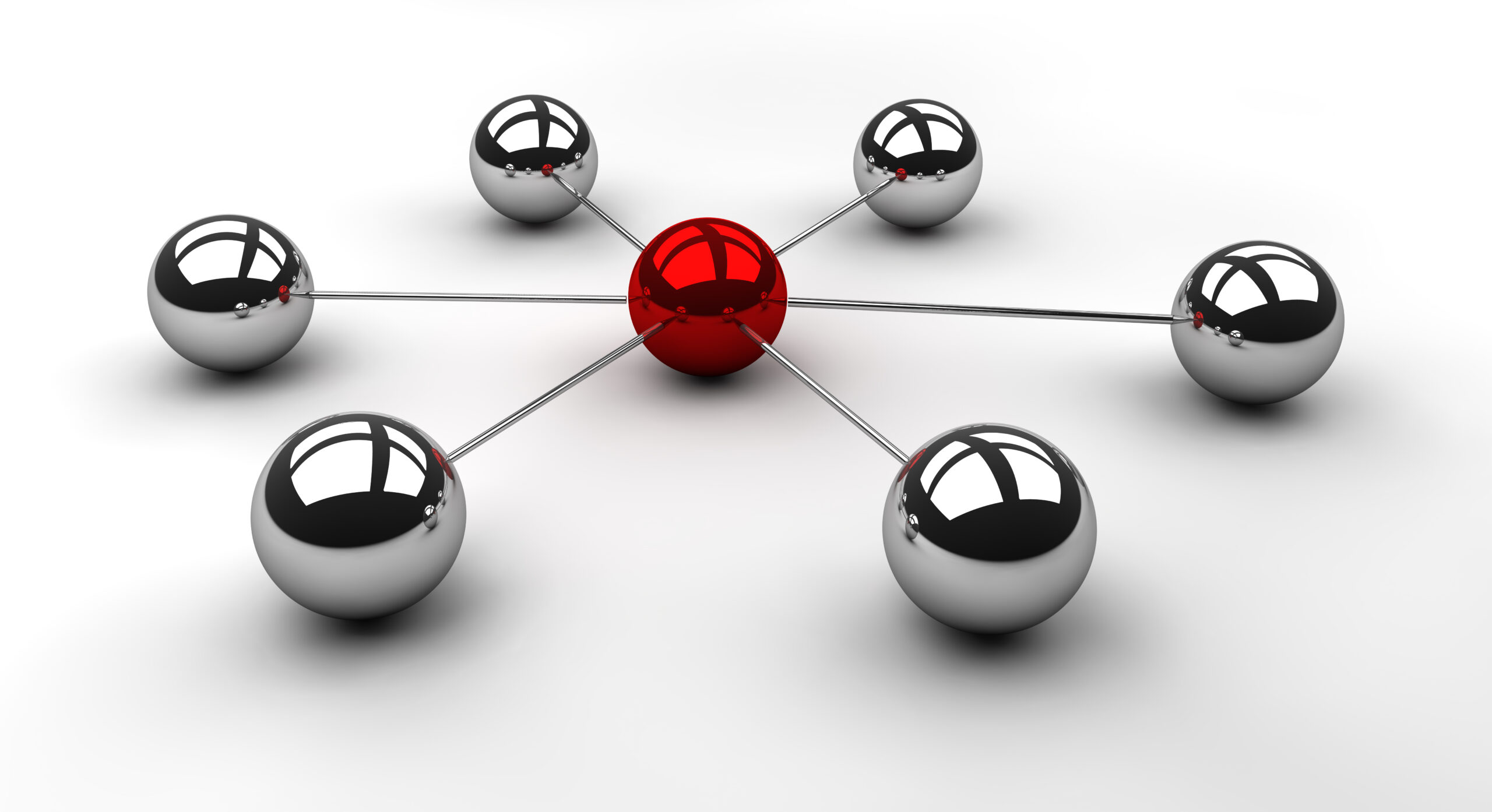 It is no accident that Ukraine is a flash point of contention between Russia and the transatlantic community. Ukraine is situated at the center of the struggle between autocratic and democratic regions. Such influence efforts, however, are on display far beyond Ukraine. Autocracies seek to undermine democratic movements abroad: Russia routinely pumps polarizing disinformation into social media around the globe; China has suppressed civil liberties in Hong Kong and applied various forms of pressure to undermine Taiwan’s democratic government. Western countries seek to counter this growing authoritarian influence and support democrats, even as they may worry that weakening of democracy at home is undermining those efforts.

Most social science research assumes that the key shapers of political regimes are domestic, including the standard of living, equality, civil society, culture, performance, and leadership. Although internal conditions are important, new political science research that I have conducted with colleagues for a forthcoming publication reveals that international ties among neighboring countries can also trigger waves of regime change and help create the striking clustering of democracy and autocracy in different regions of the world.

Democracies get by with a little help from their democratic friends and neighbors—and they are more likely to slide into autocracy where their neighbors are undemocratic. Our research accounts for the level of democracy among neighbors and former colonial relationships as an influencing factor by contrasting real, observable levels of democratization with that which would have happened based solely on domestic conditions. This analysis uses V-Dem’s Electoral Democracy Index, which measures the level of democracy on a range from 0, for the lowest level of democracy to 1 for the highest, for most countries from 1900 to 2010. We also examine annual positive and negative changes in this index, what we have termed “upturns” and “downturns.” Using spatial econometrics tools, we model the contagion of regime change and stability: how levels and changes of democracy spread from country to country and reverberate through a region, much as the vibrations from a violin string resonate through the wooden body of the instrument, amplifying the sound.

How strong are these regional influences?

Over the period studied, the immediate impacts were practically unnoticeable; however, long-term effects were significant. Long-term patterns depend on whether we focus on short-term changes or long-term levels. Sudden, dramatic shifts toward either democracy or autocracy, like plucks of the string, die out quickly. Their effects reach half of their full power within a year and 90 percent within three years. But levels of democracy, which tend to persist like long draws of the bow, keep resonating longer and grow far more. It takes 22 years for half of the influence of one country to be realized in its neighbors and more than 70 years for it to be 90 percent realized.

The long-term effect of democratization’s resonance is large. The average level of democracy 1900-2010 was at approximately Sweden’s level in 1901-1908 (0.314), but without the influence of democratic neighbors, our model suggests the average level would have been more equivalent to Czechoslovakia’s in the early 1980s (less than 0.200) when it was part of the Warsaw Pact. The magnitude of democratic contagion varies by region, too. In Asia, 1.6 percent of a country’s democracy level spreads to its neighbors, but 3.3 percent of a sub-Saharan African country’s level spreads among neighbors. Contagion rates in Latin America and Europe fall between these extremes.

The long-term impact also depends on pre-existing levels of democracy among a country’s neighbors: the more democratic a region was in the past, the more it buttresses democracy within the region and along its borders in the present day. To illustrate this point, the impact is largest in (more democratic) Western Europe, North America, Australia, and New Zealand (Figure 1). Between 1900 and 2010 the average on the Electoral Democracy Index in these countries was about the level in the United States, 1961-1962 (0.678). Without the reinforcing resonance of their democratic neighbors, the average level would have resembled those of Hungary since 2018 (less than 0.500), which lies in the non-democratic half of the range. Influence among neighbors was a necessary condition for the average Western country being democratic in the past century. 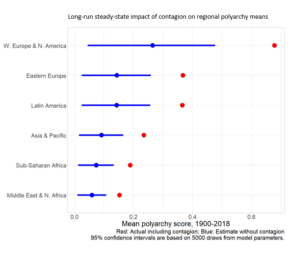 This animated map is a simulation of the influence already-present regimes had over the political development of neighboring countries from 1903 to 2010 (the most recent year for which we had complete data). Higher values (yellow) reflect positive, democratic influences from neighboring countries, not simply observable levels of electoral democracy. Dark blue shades indicate zones in which authoritarian influence tended to weaken electoral democracy.

In 2009-2010, neighbor influence was most positive in Latin America, Eastern Europe, and West and Southern Africa. The Arabian Peninsula was the region where autocratic influence was strongest, followed by Asia and northeast Africa. Unsurprisingly, Ukraine lies in one of the front-line zones between these spheres of heavily democratic and autocratic regions. Although our estimates end in 2010, we expect that these tendencies have since strengthened due to the increasing interconnectedness of the globe (the effects of the current pandemic notwithstanding).

What do these models tell us about the contagion of democracy?

These models do not specify the mechanisms of international influences—whether they are driven by hard, soft, or sharp power or other potential forces, but this study goes to greater lengths than any previous research to distinguish true country-to-country influence from the mere clustering of development by region.

What are the implications for understanding international influences on democratization?

These observations do not suggest that democracy promotion is impossible, but it is useful to consider how a country’s neighbors also condition the chances of democratic success in the long run. Because the impact of levels of democracy builds up slowly over decades, we believe that the constant day-to-day influence of national reputations, norms, and negotiations—soft power—usually plays the most important role. However, from time to time, states resort to more heavy-handed methods to force their favored type of regime on their neighbors—as we’re seeing now in Ukraine.

Michael Coppedge is professor of political science at the University of Notre Dame and a co-author, with Benjamin Denison, Paul Friesen, Lucía Tiscornia, Staffan I. Lindberg, and Yang Xu, Chapter 4, of “International Influence: The Hidden Dimension,” Chapter 4 in Michael Coppedge, Amanda Edgell, Carl Henrik Knutsen, and Staffan I. Lindberg, eds. Why Democracies Develop and Decline (Cambridge University Press, forthcoming May 2022), on which this post is based.

Correction: An earlier version of this post contained a version of Figure 1 that displayed levels of electoral democracy with and without contagion, according to relationships between countries (neighbors, allies, current colonies, and former colonies). Figure 1 has been corrected to display levels of contagion within specific regions, indicated along the Y axis of the chart. The mean polyarchy scores have been updated accordingly.